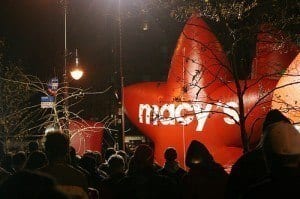 Macy’s is in hot water over recent controversy involving their SeaWorld float that is set to hit the streets for next week’s Thanksgiving Day Parade. Fresh off of the release of a documentary called Blackfish that highlights the cruelty of whales at SeaWorld, PETA has demanded that Macy’s remove the float from the parade completely.

“[The float] shows orcas swimming in a majestic sea alongside their families, and this couldn’t be further from the truth. SeaWorld deprives them of all these things. They confine them to concrete tanks and take them away from their families. This picture that this float presents is absurdly false.”

Actor Alec Baldwin has also stepped up in protest of the float stating last week that SeaWorld was “a cruel prison for whales” and that SeaWorld “should not be celebrated with a giant Shamu float parading down 34th street.”

PETA has announced that they will line the route of the parade and stage a protest against the float if it is not removed. It is reported that over 70,000 animal activists has sent Macy’s emails regarding the removal of the float, but Macy’s will not budge due to their policy to stay out of political and social issues.

“The parade has never taken on, promoted or otherwise engaged in social commentary, political debate or other forms of advocacy,” Macy’s inc. said in a statement release.

There is also controversy surrounding the South Dakota tourism float, which was suppose to have rock legend Joan-Jett singing on top of it, until ranchers criticized the float for featuring an avid vegetarian and animal rights activist a top of state’s float who are meat enthusiasts.

To solve this problem Macy’s has moved Joan Jett and her band, The Blackhearts to another float to perform. The parade will also feature Jimmy Fallon, Carrie Underwood and the cast of Duck Dynasty.