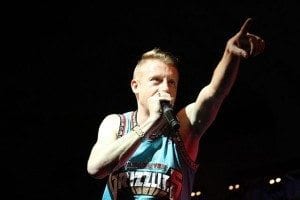 Macklemore and Macklemore and Ryan Lewis disappeared from the spotlight after the dynamic duo won Best Rap Album for their 2012 debut The Heist at the 56th Annual Grammy Awards.

In 2014 they appeared on “Arrows” by indie rock band Fences. Although they’ve shed away from the spotlight it won’t be much longer before Macklemore makes a return.

“We vanished purposefully. We vanished. Been in the studio. Disappeared,” he told Hot 97.

Fans have not been happy about his disappearance and one even took to Twitter and complained that Macklemore didn’t release an album in 2014 in which he responded, “You will this year. Believe that.”

It will be interesting to see how the dynamic duo top their earlier releases. Between “Can’t Hold Us” and “Thrift Shop” they quickly became the first duo to garner two singles at the top of Hot 100 chart.

Macklemore, who is known for voicing his opinion on social issues recently talked to Hot 97 about the great race debate in response to comments about Iggy Azalea made by Azealia Banks.

Check out the interview here.