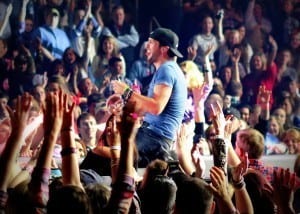 Country superstar Luke Bryan recently wrapped up his sixth annual Farm Tour this month and is currently on the road wrapping up the second leg of his That’s My Kind Of Night Tour on Oct. 25. However, it doesn’t stop there.

The “Play It Again” singer recently announced that he will be hitting the road after the holidays, extending his That’s My Kind Of Night Tour for a third leg. The 2014 tour has been a hit for the singer who sold out stadium shows, including two sold-out shows at Madison Square Garden and played for crowds of 225,000 fans with tourmates Cole Swindell and Lee Brice.

It’s no surprise that the hip-swinging singer has garnered three nominations for the CMA Awards including a nomination for Entertainer of the Year. In addition, Bryan is the first country singer to score three No. 1 hits in 2014.

Extending the tour comes with high demand and will give fans a chance to see him if they couldn’t get tickets to dates on the 2014 tour.

The third leg of the tour will kick off on Feb. 10 in Grand Rapids, Mich. and will include 5 additional dates. Tickets for the Louisville, KY show went on sale yesterday and tickets for the remainder of the dates will go on sale Oct. 24 at 10 a.m. EDT.

Bryan will be accompanied by Randy Houser and Dustin Lynch for the 2015 leg of the tour. For more information regarding tickets click here.