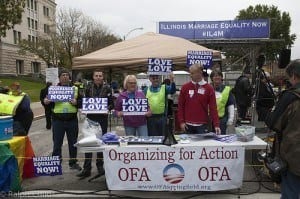 Gay marriage is now legal in Illinois! “Today the Illinois House put our state on the right side of history,” said Governor Pat Quinn, an avid supporter of the bill that was passed through the Illinois General Assembly yesterday.

This new law comes as an emotional triumph, as many couples all over the state who have been fighting for the right to love equally celebrated their long awaited victory. “At the end of the day, this bill is about the vision that the founders of our country has and wrote into our Constitution, where they said America is a journey…And we’ll continue to walk down that road to make America a better place, to make ourselves a ‘more perfect union,’ to ensure the blessings of liberty to ourselves and our posterity,” Representative and supporter Greg Harris explained.

Mayor Rahm Emmanuel made calls all day on Tuesday, trying to gain support for the bill. The bill passed after 4 p.m. Tuesday, with a close vote of 61-54. The bill is set to go in effect June 1, 2014.

President Obama, who has been very vocal about his approval of the bill, released a statement expressing his joy for the bill being passed. “As President, I have always believed that gay and lesbian Americans should be treated fairly and equally under the law,” he said. “Over time, I also came to believe that same-sex couples should be able to get married like anyone else. So tonight, Michelle and I are overjoyed for all the committed couples in Illinois, whose love will now be as legal as ours- and for their friends and family who have long wanted nothing more than to see their loved ones treated fairly and equally under the law.”

To no one’s surprise, religious leaders have spoke up against this momentous decision and have expressed their disappointment in Illinois lawmakers’ decisions. In a statement the Catholic Conference of Illinois said that they were “deeply disappointed that members of the General Assembly chose to redefine what is outside of its authority: a natural institution like marriage. We remain concerned about the very real threats to religious liberty that are at stake with the passage of this bill.”

Representative Tom Morrison, a Republican from Palatine feels that this bill will have negative effects on society. “This issue is not about two adults and their emotional and financial commitment to another. Redefining marriage will have far reaching implications in our society.”

What these religious leaders don’t realize is that as the country evolves, we must become progressive, something even the current Pope, Pope Francis, encourages. “If a person is gay and seeks God and has good will, who am I to judge him,” the Pope previously said.

Amazing vibes and happiness filled the air in Chicago, with parties and celebrations happening in the Lakeview neighborhood of Chicago. Chicago Mayor, Rahm Emmanuel visited bars Sidetrack and Roscoe’s to express his support and join in the triumph.

“This is a time when our laws are in line with our values,” Emmanuel said.