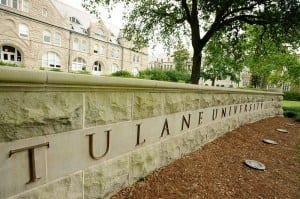 Two look-alike Tulane University freshmen nearly took a page out of “The Parent Trap” after recently discovering they are half-sisters with the same biological father.

Emily Nappi, 18, and Mikayla Stern-Ellis, 19, met through Facebook while searching for roommates at the same New Orleans, La. residence hall.  While they ultimately settled on different partners, the two kept in touch after learning of their numerous commonalities.

In addition to similar looks, Emily Nappi and Mikayla Stern-Ellis had an anonymous, Colombian sperm donor, hailed from California, participated in theater and even purchased the same fleece jacket during recent shopping excursions.

And when Stern-Ellis mentioned the unlikely situation to her parents, they could not seem to recall any other Colombian donors from the thousand or so listed at the time.

After exchanging donor numbers via text message, Nappi and Stern-Ellis realized that they in fact had a match.

Both women now share the same Facebook profile picture and are happy that they found each other.

As Stern-Ellis said in the Tulane Hullabaloo, “For me, Tulane just felt right, and this is one of the many things that proves I made the right decision.”