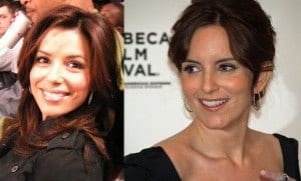 Eva Longoria and Tina Fey are two of the best-known faces in TV and their salaries reflect that.

Forbes reports that Longoria and Fey are the highest-paid actresses in TV. Longoria and Fey tied for first place on Forbes’ list, each bringing in $13 million in the span of one year.
Fey, of course, is the producer and head-writer of the NBC favorite “30 Rock,” accounting for her impressive numbers. The series has just gone into syndication on Fox and Comedy Central, a bonus that will no doubt reflect in Fey’s earnings next year.

Longoria leads the “Desperate Housewives” pack, thanks to endorsement deals with the likes of L’Oreal and LG. The rest of the “Housewives” brought home the bacon as well, with Marcia Cross bringing in $10 million and Felicity Huffman and Terry Hatcher bringing in a cool $9 million.

So who else ranked with the likes of Longoria, Fey, Huffman, Cross and Hatcher? Check out the rest of the list here.