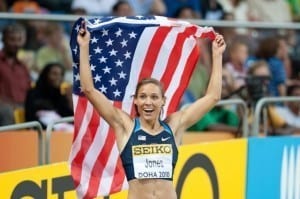 To Jones, staying abstinent is harder than training for the gold.

Lolo Jones, American Olympic track hurdler, deals with the tough task of staying abstinent. According to the track star, remaining a virgin is harder than training for the Olympics.

During an interview on HBO’s Real Sports she stated, “I want to wait until I’m married to have sex.” Initially Jones revealed on Twitter she was still a virgin. In the interview, she gives her reasoning to why she wants to remain a virgin until married:

“My mom was with my dad for 20 years—never got married—and their not together anymore…it’s just a gift I want to give to my husband.”

Jones, now 29, describes her family struggle, growing up in a family of six,and being basically raised by a single mom. She later goes on to revealing how she used to shoplift, effortlessly.

“I definitely would say, by sixth grade, I was a professional shoplifter—and not because I wanted to. I’m not going out to shoplift earrings or clothes or shoes like the average teenager…I was shoplifting frozen dinners at a grocery store. I could shoplift four frozen dinners, easily.”

Despite her shortcomings back in the 2008 Beijing Olympics, she is optimistic and looking forward to redemption in the upcoming London Olympics.

“I messed up and it cost me the gold medal. The good thing about failure is that if you learn from them. They can make you such a strong person, and there is not a day that has gone by that I have not thought about that race.”

Another notable athlete who has publicly announced their virginity is football athlete, Tim Tebow. AshleyMadison.com has offered a $1 million award to anyone who was able to disprove the New York Jets quarterback’s virginity.

Jones says in the interview she prefers finding her boyfriends through online dating sites. Abstinence was not easy for Jones; she reveals “I’ve been tempted. I’ve had guys tell me, ‘You know, if you have sex, it will help you run faster.’”