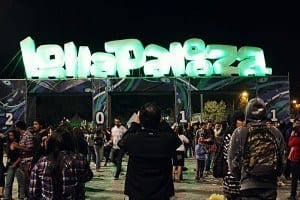 Lollapalooza announced the 2012 lineup this week, and the group of 120 bands features yet another interesting mix of mainstream, indie, and electronic artists. This year’s Lollapalooza headliners are The Red Hot Chili Peppers, Jack White, Black Sabbath, The Black Keys and Florence + The Machine.

“Every year it’s kind of a nail biter putting a lineup together,” Farrell said, “There were moments when I looked at it and I was beside myself. I didn’t know what to do.”

A lot of people have called the 2012 lineup a “letdown,” but Perry Farrell appears to be proud of the group of 120 bands and artists descending on Grant Park this August.

Perry Farrell told Rolling Stone, “What you have is three to four generations—maybe five generations of people, counting Kidsapalooza—that are all going to a place in peace, to experience music and learn to like and understand and love each other. And this is one place where I can say the generation gap doesn’t exist.