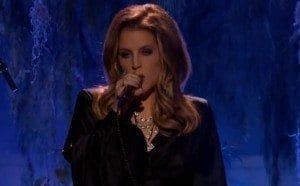 Daughter of Elvis Presley has found her own sound

Lisa Marie Presley made her debut on last night’s American Idol singing her new song “You Ain’t See Nothing Yet” from her third album ‘Storm and Grace.’

Presley famously dubbed as the ‘Princess of Rock and Roll’ has found her American roots, ironically after moving to London to work with country musician and producer T-Bone Burnett.

“The Brits tend to acknowledge and respect culture and tradition. (They love) what’s amazing about Americana music, so they naturally respected and admired it, and it was such a natural progression,” Presley tells Reuters of her experience in London.

During Presley’s early years in music her songs were directive to her identity crisis between her and her father’s legacy. Stating she was in a “disheartened state”. But with the striking resemblance she bears to the ‘King’ and being his only child, it’s pretty hard not to. Presley states, “I made some pretty angry and defensive (songs) probably anticipating what was expected of me and fighting against it…I was afraid or feeling too vulnerable.”

Now it seems she has found her footing in music. ‘Storm and Grace’ seems to shows a mellower Presley and much more accepting of her legacy. Critical responses to the album have been quite positive. Rolling stones dubbed it as “a raw, powerful country, folk and blues collection that finds her embracing her Southern roots and family name.”