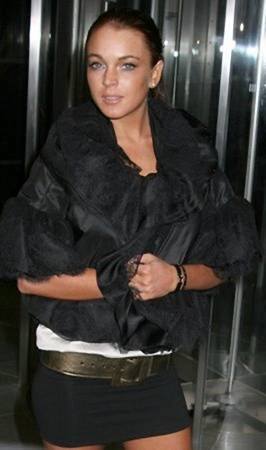 Lindsay Lohan has recently undergone obstacles throughout her career, including a breast flash and a minor car accident, in which she offered different version of the occurrence.  Lindsay Lohan is scorned for being cast as the famous and respected Elizabeth Taylor in Liz and Dick.

While on her way to the set Friday, Lindsay Lohan and her 2011 Porsche were involved in a two-party car crash.

Debris of Lindsay Lohan’s Porsche were found scattered across the road. No one was badly injured, and the crash indicated no alcohol influence on the drivers. All involved in the crash were taken to the UCLA hospital, and Lindsay Lohan was found unharmed and was released two hours later. But TMZ reported that Lohan gave various descriptions of the incident. In one explanation to the hospital, she said she was a passenger. Lindsay Lohan also alleged that she was cut off by the garbage truck, and in another version, brake failure caused the accident. Her lies could result in charges.

The truck driver said he was taken across the street and told not to report anything to authorities. Lohan’s lawyer said, “It seems to me once he [truck driver] realized he wasn’t going to get anything from Lindsay he decided to get cash by telling tales to the tabloids. I hope he got whatever money he was looking for.”

After the hospital check-up, Lindsay Lohan was able to go straight back to set to continue shooting Lifetime’s Liz and Dick.

In the meantime, Lindsay Lohan proved devotion to her work while acting out an argument with co-star Grant Bowler playing Taylor’s husband, Richard Burton, and her chest fell out of her sundress. In the scene, Bowler grabs Lohan’s arm and throws her around. The intense action is what exposed the 25-year-old.

Lindsay Lohan said, “I have always admired and had enormous respect for Elizabeth Taylor. She was not only an incredible actress but an amazing woman as well.”