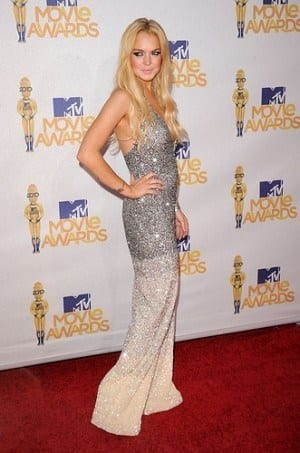 Linsay Lohan hosted Saturday Night Live this weekend, and the reviews are coming back very mixed. Although the starlet brought in the season’s second best ratings, reviewers are saying that Lindsay Lohan was not only one of the worst hosts but that the show overall was just plain bad.

Lindsay Lohan opened up the show poking fun at hersel- something that is not uncommon with celebrities who are constantly followed by rumors (Britney Spears had mechanical boobs that moved when she was trying to tell the audience the rumors about her having a boob job were false when she hosted in the early 2000’s). Kenan Thompson checked her eyes, and Kristin Wiig patted her down, but overall, Lindsay was given a ton of support from the cast and from the audience. During the monologue, Lindsay Lohan expressed her concern that she felt everyone was waiting for her to screw up, and Wiig told her, “Everybody here believes in you, everyone. We wouldn’t have you back otherwise,” and though it was part of the monologue, it sounded truly sincere.

Lindsay Lohan played Rapunzel in the Disney spoof of “The Real Housewives,” and she played herself in a spoof of “Scared Straight.” The Housewives spoof was the best sketch of the night, and the “Scared Straight” sketch would have been hilarious if Lindsey Lohan hadn’t kept tripping up her words.

Jimmy Fallon and Jon Hamm also made some appearance next to Lohan and Hamm had nothing but good things to say about her performance, “I thought she did a great job. There was so much scrutiny and so much pressure on her, but she handled it with grace and aplomb.”

Though critics are saying Lindsay Lohan failed; it definitely wasn’t because she was “over exhausted”; she simply seemed really nervous. She also can’t be blamed for lack-luster skits since that falls on the writers shoulders.

The rumors say that Lindsay Lohans hosting duties are her first steps back into the professional, working world of Hollywood, but some are saying she simply isn’t ready for it yet.