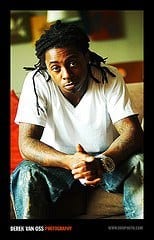 Lil Wayne has a long history of landing in hot water; his rap sheet includes felony gun possession and a multitude of drug charges, and he’s even been sued by the Rolling Stones. But the rapper’s latest song may have crossed the line—“Karate Chop,” a new song which was leaked online last weekend, features a lyric from Wayne that makes a sexual reference to the infamous Emmett Till beating.

The song is actually a remix of a track already released by rapper Future. The new version, though, features a verse by Lil Wayne which included a sexual analogy involving the Till murder. News outlets aren’t printing the lyric in question.

Epic Records is now saying it’s going through “great efforts” to take the song offline and release an edited version without the explicit lyric.

“We regret the unauthorized remix version of Future’s ‘Karate Chop’ was leaked online and contained hurtful lyrics,” the label said in a statement. It went on to say that Epic will go “through great efforts to take down the unauthorized version…Out of respect for the legacy of Emmett Till and his family and the support of the Reverend Jesse L. Jackson, Sr.”

Emmett Till, a black teenager from Chicago, was murdered in 1955 for whistling at a white woman while visiting his family in Mississippi. His body was found wrapped in barbed wire, with his eyes gouged out and a gunshot wound to the head. An all-white jury eventually dismissed charges against the two white men who stood trail for the murder.

Airickca Gordon-Taylor, a cousin of Emmett Till, told the Chicago Sun-Times the lyric was hurtful to Till’s family.

“He wouldn’t even be out there rapping these stupid lyrics without the sacrifice Emmett made. Personally, I think Lil Wayne should just go ahead and apologize to my family. It’s hurtful.”