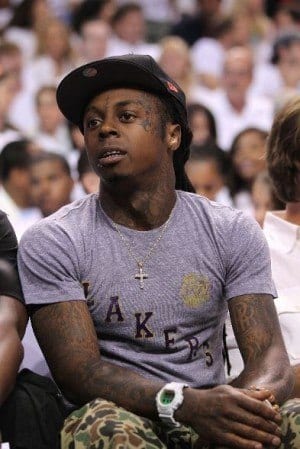 Lil Wayne Says He Had Sex with Chris Bosh’s Girlfriend

Lil’ Wayne is once again proving that he should restrict his lovely views on love, sports and politics to the confines of music lyrics.  The Daily News reports that during a performance in Houston last Sunday night, Weezy claims that he slept with the wife of Miami Heat player, Chris Bosh.

F—k LeBron, f—k She-Wade, f—k Chris Bosh, f—k all of them ni—as, man,” Lil Wayne told the crowd, according to MTV.  Lil Wayne then gleefully added, “And, and, and I f—ked Chris Bosh’s wife.”

“Some people attack those who have the peace and joy they wish they had! Pay them no mind! Live your dream, strut and wave, said Gabrielle Union, who is sating Wade.

Weezy’s rant was likely inspired by an incident that took place last week when Lil Wayne claims that he was kicked out during a Heat-Lakers game in Miami.

Reports state that he was thrown out after making a gun gesture at another fan during the game, a reaction that Weezy, an avid Lakers fan, clearly feels was unjustified.  He still blames the Heat for the incident.  Don’t count on the rapper growing up anytime soon.

As if this reporter’s opinions of Weezy aren’t clear enough, what do you think of the popular rap artist?  Post your comments below!