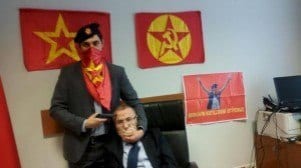 A prosecutor of the Turkish court was killed on Tuesday after hostage negotiations failed and a shootout broke out between the hostage takers and police. Negotiations lasted for about six hours inside a courthouse in Istanbul.

According to the state run news TRT, the prosecutor was identified as Mehmet Selim Kiraz. He sustained a head wound during the shootout and died on route to a hospital.

The DHKP-C militants dressed up as lawyers in order to gain access to the courthouse.
The motive for this raid on the courthouse was speculated that it was in retaliation to the death of a protestor during anti-government protests in 2013 after the protestor was hit by a gas canister.

The hostage takers ordered that the policemen involved in that death to confess and to have those policemen be tried by ‘people’s courts.’

Mehmet Selim Kiraz was involved in the investigation of the protestor’s death.

The DHKP-C is labeled as a terrorist organization by the Turkish government and the group was more active in the 1970s though a suicide bombing that killed one security guard was linked to the DHKP-C in 2013.