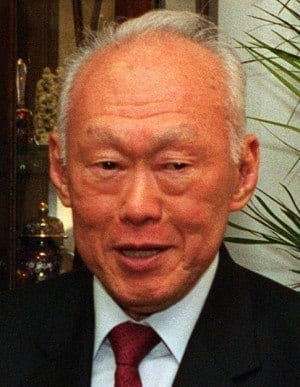 According to the Prime Minister’s office, Lee Luan Yew has died Monday, aged 91. Lee was suffering from severe pneumonia for nearly 2 months.

Lee was heavily involved with the transition from British rule and further into Singapore sovereignty. Under his leadership, Singapore grew from an outpost of the British Empire with no natural resources to one of the Four Asian Tigers (Asian nations that experienced great economic growth following World War II). Singapore developed into an industrialized nation through trade relations with ASEAN and with China. To this day, Singapore remains a top place to do business around the globe.

Singapore’s extraordinary survival and flourishing is tantamount to the leadership of Lee Kuan Yew and thus part of the legacy he left to Singapore.
However whilst under Lee’s jurisdiction, punishment for crimes remain very strict. Caning is allowed for the lightest of crimes. Under Goh Chok Tong, Lee’s successor, the sale of gum was also prohibited on the island nation. Lee remarked that “If you can’t think because you can’t chew, try a banana.”

Freedom of the press and democracy also have much still to be developed. Singapore placed 153 out of 180 countries in the World Press Freedom Index. The ruling People’s Action Party (PAP) have won every election since the establishment of modern Singapore. Libel actions have been used by the PAP to stifle dissent by opposition.

Regardless of whether Lee is remembered for his economic achievements or his heavy handedness on policy, he should be acknowledged by all for what he has paved to make Singapore what is currently is.