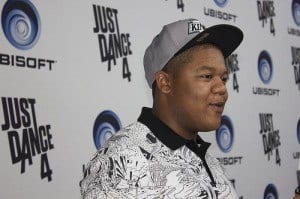 Okay, Twitter, calm down: Kyle Massey has released a statement saying that he does not have cancer.

Over the weekend reports of Dancing With the Stars runner-up and That’s So Raven co-star Kyle Massey’s disease sprouted up around the internet. Massey squashed these rumors as soon as he could, calling them “insensitive” and “classless.”

“Overnight it was trending on Twitter that I am dying of cancer,” Massey told Entertainment Tonight. “I want to say it first, ‘I do not have cancer,’ and I don’t know where this inconsiderate and insensitive rumor originated from.”

Massey, 21, was particularly shocked by the rumors because of his close connection to people who currently have or recently died from the disease. “Cancer is a disease that is very personal to me and my family,” he said. “I have two uncles and a very dear friend who passed away in the last two years from cancer, and my granddad currently has prostate cancer, and my grandmother is currently in a nursing home because of Alzheimer’s disease. So, making light of any illnesses that a person has no control over getting is not something to joke about or make light of!”

He goes on to say that he will put forth every ounce of effort he can to figure out who started the hoax, especially in light of the other real tragedies that made headlines this past weekend.

The tragedies that Massey was likely referring to are both the Trayvon Martin murder trial, in which George Zimmerman was found not guilty of murdering the 17-year-old boy, and the death of 31-year-old Glee star Cory Monteith in his hotel room. Kyle Massey’s cancer would be just one more thing to add to the bad news pile, but fortunately the rumors are just that: rumors.

There is a valuable lesson to be learned here, and at the risk of undermining my own credibility I have to say it: don’t believe everything you read on the internet.