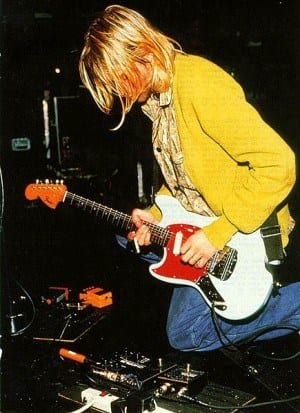 Kurt Cobain passed away 18 years ago today, and Nirvana fans are looking back at his too-short life.

Kurt Cobain rocked the music world, and not in the rock n’ roll sense. He literally shook up the music scene in the early 1990s. As grunge took over the Top 40 list, Kurt Cobain skyrocketed to stardom.

Kurt Cobain was found dead in his Seattle home on April 8, 1994, several days after he had committed suicide with a self-inflicted shotgun wound to the head.

Kurt Cobain and Nirvana emerged into the music scene when glam pop, heavy metal, and bands built on well-calculated formulas had alternative music fans begging for something fresh. What they got was something dirty, dark, and awesome.

Nirvana formed in Washington state in 1987 where the band quickly established itself in the Seattle grunge scene. In 1990 Nirvana signed with DGC Records, with whom they began recording their first major label album Nevermind.

Kurt Cobain was the filthy essence of the wrinkly-flannel covered early 90s. His long, greasy blond hair and scruffy face gave sexy a new look. His rough powerful voice put a unique spin on the punk sound that ruled the alternative scene before the grunge movement.

Kurt Cobain died at age 27, making him one of the most famous members of the 27 Club, and also causing the meme to stick. He joined musical greats Jimi Hendrix, Janis Joplin, Jim Morison, Brian Jones and Robert Johnson, and the newest addition to the 27 club Amy Winehouse.

It’s believed Kurt Cobain committed suicide because he was unable to cope with his fame and “rock star” public image. He left behind is wife, Courtney Love, and their daughter Frances Bean Cobain.