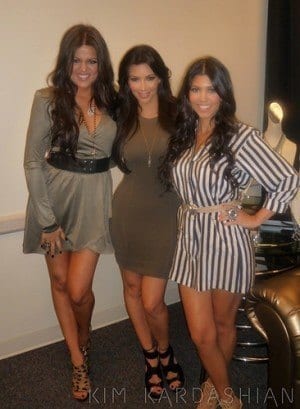 Kourtney Kardashian may have given birth to her daughter July 9, but the world was let into the delivery room during the Keeping Up With the Kardashians season finale.

In an episode filled with baby drama coming from all three of the Kardashian sisters, Kourtney Kardashian gave birth to Penelope, delivering the baby girl with her own hands. Kourtney also used this technique when delivering her first child, son Mason. Both of Kourtney’s children are fathered by on and off romance Scott Disick.

Kourtney Kardashian tweeted during the season finale in remembrance of the birth of her daughter. “Wow! Crazy to watch this! Magical. RT @KardashianNavy: ‘This baby is coming!’ #KUWTK,” she tweeted.

In other baby drama, the season finale also included Khloe Kardashian, who has been married to Lamar Odom for three years, getting increasingly frustrated with her trials at having a baby of her own. The episode showed Khloe visiting a fertility clinic with her sister Kim and learning that she has not been ovulating. After the appointment, she opted for hormone injections.

All of the baby talk (and action) for Khloe and Kourtney Kardashian, Kim also took part in the episode’s main theme. Kim decided to freeze her eggs in an effort to be proactive about the possibility of babies in her future. “I’m glad that I’m freezing my eggs. I can be proactive and I can be prepared when the time comes,” said Kim. “I want to be safe.”

As mother of Kim, Khloe and Kourtney Kardashian, Kris Jenner says she just wants to see the girls happy—and babies will bring that unique happiness. “All I really want at the end of the day is for all my daughters to experience that joy in life.”

What did you think of Kourtney Kardashian’s up close and personal televised birth?