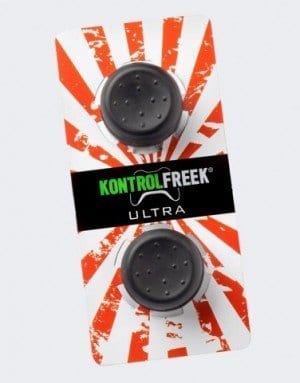 With the launch of the next generation of Xbox gaming, the Xbox One introduced a new controller. Granted, the Xbox 360 controller is still considered the epitome of controller perfection, but we all know the console game and the changes therein. That said, Kontrol Freek, maker of the beloved thumbstick add-ons that help with everything from first-person shooters to sports games, is at it again. This time around they’re making some different modifications to the overall feel of where your thumb rests, while still maintaining the same benefit as before.

First, we’ll start with the Kontrol Freek Ultra, the most basic option, and the one that put Kontrol Freek on the map. The design is still simple, as it elevates the thumbstick about a half inch and increases leverage, making it easier to maneuver high-sensitivities in shooters, as well as creating precise crossovers in NBA 2K14. Concave design allows the contour of your thumb to rest gently in the small “scoop”, which matches Xbox One thumbsticks themselves.

The biggest issue is that the Xbox One thumbsticks have changed since last generation. On Xbox 360 the thumbstick was elevated from the controller about 5/8”, so have the additional 1/2” from the Kontrol Freek Ultra was manageable. With the Xbox One however, the height changed to about 6/8” and for those who spent a lot of time with the Xbox 360, the increase of 1/8” is noticeable and uncomfortable.

It may have something to do with the controller overall, as there are contextual changes as well, but the Kontrol Freek Ultra doesn’t give the same enormous benefit that it once did. It feels too tall now, and players who need the Kontrol Freek for precision — that’d be everyone — will feel awkward and clumsy when they upgrade to the Ultras on Xbox One.

Thank goodness Kontrol Freek doesn’t rest on one design though, because the Kontrol Freek CQC’s also make a return. These were introduced back on the Xbox 360 for players who were uncomfortable with the original Ultra design, particularly those with smaller hands who couldn’t manage the full 1/2” elevation.

The CQC’s add just 1/4” to the controller and is clearly marketed at those who think the Ultras are just “too much”. The design is simple though, with a greem “KF” emblem etched on a semi-convex pad. The lack of additional designs is disappointing, but the overall comfort of the CQCs is unrivaled throughout Kontrol Freek’s entire arsenal.

The biggest benefit to the Kontrol Freeks, for both sets, is the diameter of the thumb rest. The Xbox 360’s thumbsticks measured nearly 3/4” in diameter, while the Xbox One measures just over 1/2”. Kontrol Freek has widened that diameter back to 3/4” and in the process has made the hardware invaluable. Whether you are comfortable with a slight increase or a large one, you’ll enjoy the diameter increase without a doubt, making price tag of $15 or less seem inconsequential.