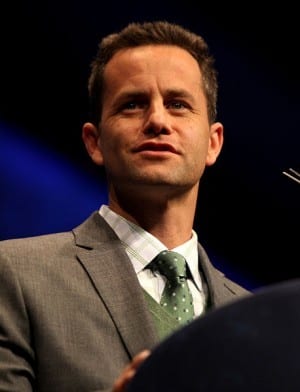 GLAAD is quick to respond

An evangelical Christian, Kirk Cameron expressed his views on the issue of gay marriage. “Marriage is almost as old as dirt, and it was defined in the garden between Adam and Eve. One man, one woman for life till death do you part. So I would never attempt to try to redefine marriage. And I don’t think anyone else should either,” Cameron said. “So do I support the idea of gay marriage? No, I don’t.”

His views on homosexuality? “I think that it’s unnatural. I think that it’s detrimental and ultimately destructive to so many of the foundations of civilization,” Cameron said.
“Piers, you’re speaking to a man who’s a Christian and I believe all of us are sinful, that’s what I teach my kids. I teach them the values that I hold dear, I treasure the God that loves me and forgives me of my sin.”

Homosexuality isn’t the only issue the former “Growing Pains” star discussed on the CNN program. He said abortion is “wrong in any circumstances.”

“I think that someone who is ultimately willing to murder a child, even to fix another tragic and devastating situation like rape or incest or things like that, is not taking the moral high road,” Cameron said. “I think that we’re compounding the problem by also murdering a little child.”

The Gay & Lesbian Alliance Against Defamation issued a statement in response to the actor’s recent appearance on the show. “In this interview, Kirk Cameron sounds even more dated than his 1980s TV character,” said Herndon Graddick, senior director of programs at GLAAD, in a statement. “Cameron is out of step with a growing majority of Americans, particularly people of faith who believe that their gay and lesbian brothers and sisters should be loved and accepted based on their character and not condemned because of their sexual orientation.”

“With an increasing number of states recognizing marriage equality, Americans are seeing that marriage is about committed couples who want to make a lifelong promise to take care of and be responsible for each other and that gay and lesbian couples need equal security and legal protection. That’s not ‘redefining’ anything.”

Piers Morgan stuck up for Cameron, telling TMZ,  “I felt that he was honest to what he believed… And I don’t think he was expecting the kind of furor that it’s created.”

When asked if he thought Cameron’s views were outdated, Morgan answered, “He was pretty brave to say what he said. It’s — many would argue — an antiquated view about many of these issues.”