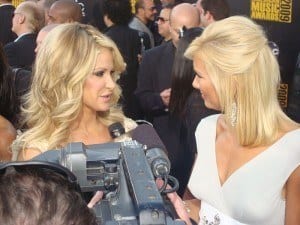 Kim Zolciak is expecting her second child with husband Kroy Biermann, according to the NY Daily News.

After the announcement, Zolciak, 33, was flooded with positive responses from fans all around the world.

In response to this, the Real Housewives of Atlanta star tweeted her appreciation.
“We feel so blessed. I really appreciate all the Congrats from each and every 1 of u today! We are so excited and so blessed! Thanks again!”

Zolciak will also be working on a clothing line during her pregnancy.
She tweeted, “Meeting today about the baby clothing line!! So excited!!!!!!”

The 26-year-old Atlanta Falcons player and Zolciak married November 11, 2011.
In a past interview, Zolciak spoke highly about her husband before they married.
“He makes me a better person,” she said. “I love everything about him.”

The reality star told Life & Style, “Kroy and I are so excited. To decided we wanted to get pregnant again and have it happen so quickly was such a blessing.”

Zolciak has two daughters Brielle, 15 and Ariana, 9, from a previous marriage and a son Kroy Jagger Jr, born last May.

Zolciak is known for her presence on The Real Housewives of Atlanta, but has recently landed her own spin-off called Don’t be Tardy for the Wedding.

Don’t be Tardy for the Wedding will showcase Kim and Kroy’s wedding.
It premieres April 26 at 9/8C.