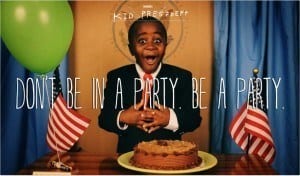 Kid President is an adorable 9 year old throwin out your typical adorable little kid cliché advice that resonates somewhere and even solicits a giggle despite the warm “feel good” glow filter edited over the whole piece.  Kid Presidents is actually Robby Novak of Henderson, Tenn., sallied up in a three piece suit, jiggin down a football field and handing out pick-me-up’s to those who have fallen to boredom.  Life is hard, Kid President admits, but “we can cry about it, or we can dance about it.”

The Kid President alter ego was facilitated by Novak’s grown-up brother-in-law, Bradley Montague.  Montague started putting together some of Novak’s goofy one-liners and tweting #iamkidpresident.  The Kid President’s videos went viral when SoulPancake picked up on Novak’s shenanigans, and the duo release a daily message from the Oval Office on YouTube.

“Two roads diverged in the woods, and I took the road less traveled,” Kid President recites, then goes with his own take, “AND IT HURT, MAN! Really bad! Rocks! Thorns! And glass! … NOT COOL, ROBERT FROST!

Listen to the tiny President, who’s acting chops are pretty significant for a kid who hasn’t hit the double digits yet.  His pithy pieces may seem wise beyond their years, or they might be that sort of wisdom that innocent, good natured kids seem to naturally possess.

“The world needs you to stop being boring, yeah, you, boring is easy, everybody can be boring. Your gooder than that,” says Kid President, touching on an easy truth we can always be reminded me of.  Go’on now let’s see that side shuffle n Harlem shake in honor of the kid.