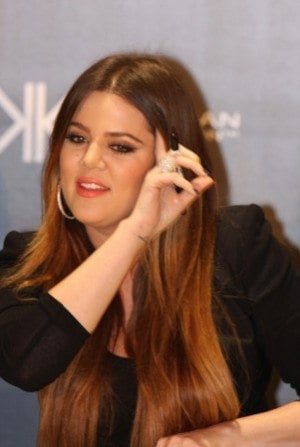 Khloe Kardashian takes Kim’s place as the Kardashian in the news. Several things have happened in recent days that have the reality star plastered on tabloid covers.

First are rumors of Khloe Kardashian wanting a divorce from NBA player Lamar Odom. Sources close to the couple say that their marriage has been on the rocks for a while. One said that Khloe kicked Odom out of their bedroom several months ago.

Behind all the turmoil are Khloe Kardashian’s fears that Odom has been cheating on her. And it looks like she’s right to be suspicious.

Odom has, reportedly, been in a year-long affair with a woman he met at a strip club. A friend of the woman explained in detail to Star magazine what happened when they met and how the affair progressed.

But before you break out the tissues and mourn then end of Kardashian and Odom, one recent incident could be a glimmer of hope for the couple.

A video surfaced on TMZ Wednesday that showed Odom destroying a photographer’s equipment. He followed up the tantrum by posing with a female fan for a picture. Khloe Kardashian jumped to Odom’s defense on Twitter, saying, “F**k the papz!!!!! You f**king losers!!!!! But shout out to my hubby for posing with the fans! I love my Lam!”

While it’s far from reconciliation, the support from Khloe Kardashian does show that she still cares for Odom. As of last year, Khloe was reluctant to consider divorce, “I’d like to think divorce is not an option.” But she has yet to say anything recently in regards to the rumors surrounding her marriage.