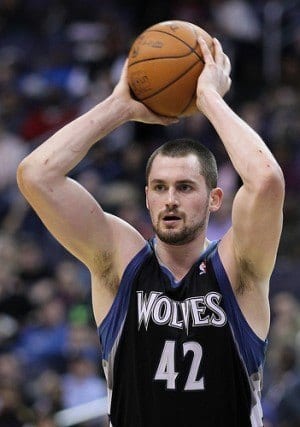 Concussion suffered earlier in the month is cause for decision

Kevin Love, of the Minnesota Timberwolves, will not play the rest of the season. The concussion he sustained from an accidental elbow in the head from JaVala McGee earlier in the month.

Kevin Love has been cleared by the NBA to return to the court and has passed all concussion tests, but the Wolves don’t want to risk further injury for their All-Star forward. Timberwolves’ coach Rick Adelman said he wanted to keep Kevin Love on the bench for the rest of the year because head injuries are tricky and doesn’t want to put Love in any danger.

Kevin Love is the league’s fourth-leading scorer and second leading rebounder, so the Wolves’ decision definitely wasn’t an easy one. Kevin Love was practicing on Saturday and said he felt good being back on the court, but knows that sitting the rest of the season out is in the best interests of his long-term health. Luke Ridnour, guard for the Timberwolves, will also be sitting out the rest of the season with a sprained ankle. Coach Adelman said, “It’s just best for both of them not to push it.”

The news of their teammates have led to poor morale overall. Guard J.J. Barea believes some of the team has stopped caring. “We’ve got problems here,” he said. “We have a lot of guys that don’t car. On a basketball team, when you have a bunch of guys who don’t care, it’s tough to win games. We’re going to keep getting (losses) here until we get players that care about winning, about the team, about the fans.”