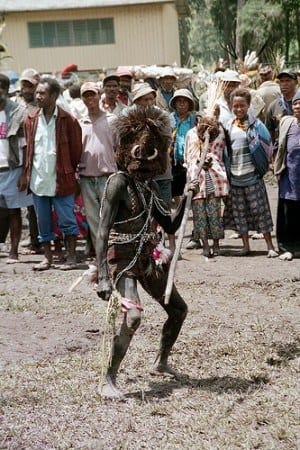 Kepari Leniata, a 20-year-old mother from Papua New Guinea, was accused of witchcraft and burned alive in front of hundreds, according to police.

Kepari Leniata was a mother of two. A 6-year-old boy neighbor died in a hospital Tuesday after complaining of stomach and chest pains. The boy’s relatives suspected witchcraft was involved in his death and tracked down two women who went into hiding in a nearby jungle. The women admitted to practicing witchcraft but named Kepari Leniata as the person responsible.

The boy’s family tracked Leniata down Wednesday, stripped her of her clothes and tortured with a hot iron rod on the way to her death. She reportedly confessed to practicing witchcraft while being tortured.

The mob behind her death covered Leniata in gasoline while her hands and feet were bound and threw her in a pile of burning trash. They threw burning car tires on top of her, as well.

According to the National Post, no arrests have been made in connection to Leniata’s death.

“It is reprehensible that women, the old and the weak in our society should be targeted for alleged sorcery or wrongs that they actually have nothing to do with,” Prime Minister Pete O’Neill said.

In a statement by the U.S. Embassy in Port Moresby, the crime was called a “brutal murder” and provided as evidence of “pervasive gender-based violence” in the country.

Police report that sorcery and witchcraft are practiced in the nation by cults and that typically sorcery is fought back against by more sorcery, but violence has become more prevalent, recently.