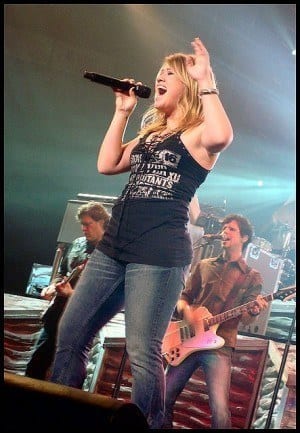 It’s safe to say that Kelly Clarkson is the queen of covers.

The former American Idol star has become known for her covers of hit songs that thankfully make their way to YouTube thanks to enchanted fans.

Clarkson’s popular covers range from Justin Timberlake to Sam Smith and they just keep getting better.

Her impeccable cover of Sam Smith’s ballad, “Stay With Me” has garnered rave reviews and attention among mainstream outlets and fans alike, leading the video to go viral. But while her rendition of the hit song was absolutely beautiful, Clarkson recently surprised fans with another soulful cover at a recent show.

At her recent show in Buffalo, she surprised fans with a cover of Taylor Swift’s latest single, “Shake It Off” and Swift tweeted her approval of Clarkson’s unique rendition.

What do you think of Clarkson’s cover of the upbeat tune, “Shake It Off?” Check it out here.