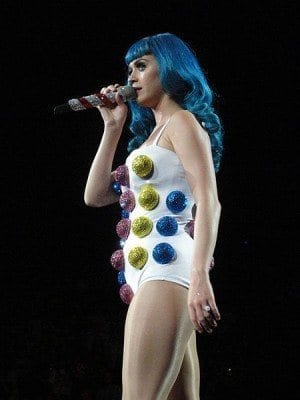 Is it due to her new military-chic look?

Rihanna has been in the news lately sporting a new tattoo and posing as a hardcore chick on a poster for the upcoming movie, Battleship. And, it seems that Rihanna has competition in the tough girl stakes, in the form of her close friend, Katy Perry. Perry’s latest music video, Part of Me, was released yesterday and shows the once dolled up, blue haired pop star in marine boot camp, knee deep in mud.

Entertainment Weekly’s Music Mix said, “It’s less G.I. Jane and more In the Army Now, but Katy Perry’s new pop-military video for Part of Me is still an intense ride.”

Speculation surrounding the video ponders on whether Katy’s new look is in response to her recent split with movie star Russell Brand. The Huffington Post reported that “Perry has denied the song is about Brand, stating she wrote the record more than two years ago. This means that the track could very well be about her other famous ex, Gym Class Heroes frontman Travie McCoy.” Who knows?

MTV asked Katy about rivalry between her and Rihanna but the eight time Grammy nominee played it off saying, “I don’t even think Rihanna knows that I have a service-based video,” she said. “I saw a little clip of her in the Battleship trailer — I’m very excited for that film, especially because there’s aliens in it now. It’s not, you know, Battleship, your move, bro,’ it’s like aliens. I love aliens.”  Nonetheless, comparisons have been drawn between the two stars, and Katy Perry certainly seems to have embraced a new image in her latest video.