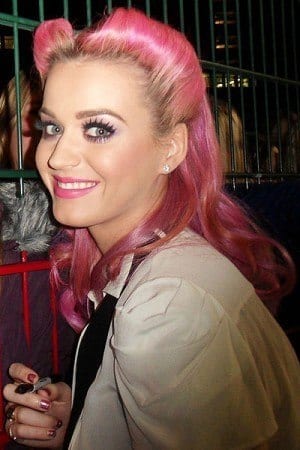 Katy Perry has found herself another British hottie. The singer was reportedly snuggling up with Florence + the Machine guitarist Robert Ackroyd at the Coachella Valley Music and Arts Festival both weekends.

Photos have surfaced showing Katy Perry holding hands with and hugging the guitarist, and of Ackroyd bending her back for a kiss.

Ackroyd tweeted his happiness on April 17. “Best Coachella ever. Scratch that, best weekend ever.  Dre, Snoop, Pac, Nate, Fiddy & KP.” He might not want to get too used to her company though.

Looks like she’s not trying to settle down anytime soon.

Katy Perry was married to British comedian Russell Brand for 18 months before he filed for divorce last December citing irreconcilable differences.” The divorce will be finalized in July.

Brand hasn’t appeared terribly heartbroken over the split either. He was rumored to be dating artist Oriela Medellin soon after filing for divorce, and is currently dating model Nikolett Barabas.