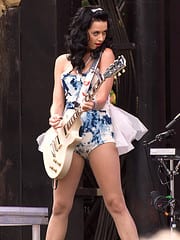 After canceling a dream birthday trip to Egypt after details of the trip were leaked to the public, Katy Perry book a last minute private plane to Europe where she celebrated her thirtieth birthday.

The “Dark Horse” singer has been on a three-week hiatus from her Prismatic World Tour in Morocco when she decided to make last minute arrangements to ring in her thirtieth birthday celebration.

According to E! Online, Perry was spotted arriving at Le Bourget airport from Morocco alongside EDM producer and boyfriend Diplo and her entourage this past Saturday.

Perry who sported a matching Adidas tracksuit and flip flops was spotted taking pictures with Diplo before she and her entourage boarded a shuttle into the city where they prepared for a birthday extravaganza. Festivities included dinner on the second floor of the Eiffel Tower before a night out in the city before boarding a plane the next day.

According to reports, the duo split ways as Diplo traveled to Korea for a scheduled performance.

Recent news also broke that Diplo is expecting his second child, not with pop queen Perry but his ex-girlfriend Kathryn Lockhart whom he has a four-year-old son named Lockett with.

According to multiple reports, Lockhart was said to have been newly pregnant around the time that Diplo and Perry began seeing each other back in April. Diplo has not commented on the reports.