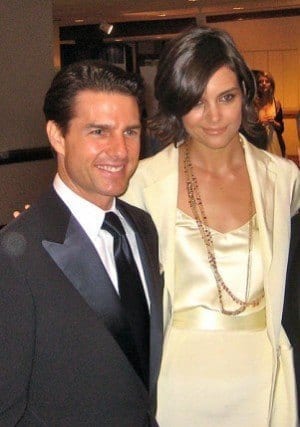 No more couch jumping for Maverick

Only two days after Katie Holmes filed for divorce, actor Tom Cruise was seen on the set of his next film Oblivion. Sources close to Holmes told the Post that she fears those associated with Scientology are following her every move.

The news of Katie Holmes having filed for divorce came through her lawyer Friday.  And reports state that Cruise was surprised by Holmes decision

“Tom is deeply saddened and is concentrating on his three children. Please allow them their privacy to work this out,” Cruises publicist said in a statement.

Though, Fox News reports that law-enforcements sources said Katie Holmes is afraid that Tom Cruise may and try and kidnap their daughter Suri.

The couple was married Nov. 15, 2006 at the 15th-century Odescalchi Castle in Barcciano, Italy in Scientology fashion.

While Katie Holmes having filed for divorce from Tom Cruise may have come as a surprise to the actor, fans of the two are not surprised in the least. Given Cruise’s reputation as being sporadic and outlandish behavior, it was only a matter of time.

The two will fight for custody of their daughter. Cruise has yet to hire legal counsel for the divorce.