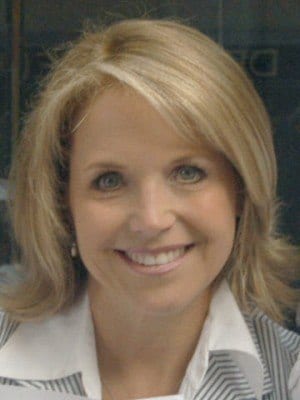 Katie Couric will be the co-hosting Good Morning America with George Stephanopolous this week. The former Today Show anchor will be sitting in for the vacationing Robin Roberts.

ABC is attempting to break the 16-year weekly ratings winner streak of the Today Show with the appearance of Katie Couric on their morning show. The Today Show and Good Morning America have long been rival wake-up shows.

Katie Couric was co-host of Today in December 1995 when the show’s streak began. Today has won every week in ratings since then. Good Morning America is sneaking up on Today though – last week GMA was only 137,000 viewers behind Today, the closest the two shows have been since 2008.

Couric was host of Today for 15 years before leaving the network in 2006. She started at ABC last year after anchoring the Evening News at CBS, which was a ratings flop. ABC has a lot riding on Couric’s week on GMA, as the company is syndicating her daytime talk show Katie in the fall.

What does GMA have in store for viewers this week? Director James Cameron and South Carolina Gov. Nikki Haley will be on the show Monday, and Tuesday will feature Camille Grammer. Wednesday will feature the celebrity voted off of Dancing With the Stars, and viewers can expect a Couric interview with Eva Longoria on Thursday followed by a Rascal Flatts performance on Friday.

How are other morning shows countering Couric week? CBS This Morning will have Oprah Winfrey on Monday, and Sarah Palin will be co-hosting NBC’s Today Show on Tuesday.

Will Katie Couric bring good luck to Good Morning America? Or will Roberts fans tune out the show this week?