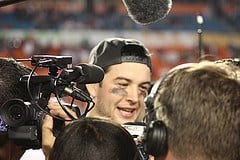 Katherine Webb, girlfriend of University of Alabama quarterback AJ McCarron, has stolen some of the spotlight of Alabama’s BCS championship victory Monday night after catching the eye of an ESPN announcer during a brief appearance on camera.

Webb, the winner of 2012’s Miss Alabama contest, spent about 30 seconds on camera during the first quarter of Alabama’s 42-14 romp of Notre Dame in the BCS National Championship game.

ESPN announcer Brent Musburger fawned over Webb: “You see that lovely lady there, she does go to Auburn, but she’s also Miss Alabama and that’s AJ McCarron’s girlfriend,” he said. “You quarterbacks, you get all the good looking women.”

As the camera stayed focused on Webb, Musburger continued: “What a beautiful woman. Wow. If you’re a youngster in Alabama, start getting the football out and throw it around the back yard with pops!” he stated to the audience.

Leslie Webb, mother of Katherine, told ABC News that she “watched the whole thing” on TV at the time.

“I was amazed at what was going on as soon as her picture came up on the screen our phones just lit up,” she said. “We checked out her Twitter, and it was flooded within seconds. We were in awe of it.”

Webb, 23, saw her Twitter presence explode overnight, as she went from having just a few hundred followers Monday morning to over 143,000 followers by Tuesday afternoon. One of those followers was Arizona Cardinals defensive end Darnell Dockett, who tweeted Katherine his phone number.

According to her pageant biography, Web grew up in Phenix City, Alabama, and studied Business Management at Auburn University. She is currently working as a professional model and a training director at a Chik-fil-a in Columbus, Georgia.

According to the Columbus-Ledger-Enquirer, Webb and current boyfriend McCarron met first on Twitter, then saw each other in person  when McCarron attended the 2012 Miss Alabama pageant in December.

Webb told the Enquier that “(McCarron) has such an amazing heart…he realizes that family and friends and the people closest to you are most important.”