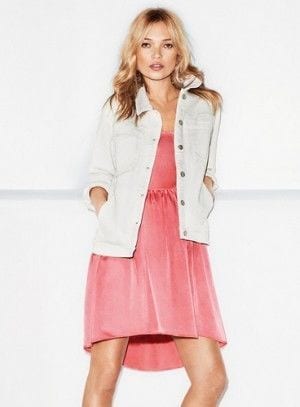 Kate Moss claims the Calvin Klein photo shoot she had with Mark Wahlberg caused her nervous breakdown back when she was a teen. Although these photos helped propel Moss into stardom, the black-and-white photos from 1992 reportedly caused her emotional issues.

Kate Moss told Vanity Fair, “I had a nervous breakdown when I was 17 or 18, when I had to go and work with Marky Mark and Herb Ritts. It didn’t feel like me at all. I felt really bad about straddling this buff guy. I didn’t like it. I couldn’t get out of bed for two weeks. I thought I was going to die.”

I’m not sure many girls would take issue with being paid to straddle Mark Wahlberg, but maybe I’m wrong.

Moss later went to the doctor where he prescribed her Valium. Photographer Francesca Sorrenti then told Moss, “You’re not taking that.” Moss said, “It was just anxiety. Nobody takes care of you mentally. There’s a massive pressure to do what you have to do. I was really little, and I was going to work with Steven Meisel. It was just really weird—a stretch limo coming to pick you up from work. I didn’t like it. But it was work, and I had to do it.”

Thankfully Moss was able to push through the difficulties of posing with good-looking men and being driven around in giant limos.

Things changed for the better for Moss after meeting Johnny Depp at a Manhattan restaurant when she was 20. According to Moss, Depp gave her that stability that she hadn’t felt before. She said, “There’s nobody that’s ever really been able to take care of me. Johnny did for a bit. I believed what he said. Unfortunately, the couple split in 1998.