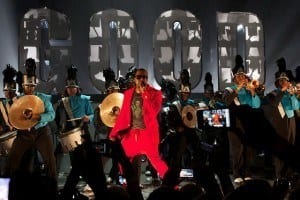 Kanye West thinks he is next Steve Jobs. In an interview with the New York Times, West said “I think what Kanye West is going to mean is something similar to what Steve Jobs means. I am undoubtedly, you know, Steve of internet, downtown, fashion, culture. Period.”

All I have to say is “What the f***?” Steve Jobs changed the electronics industry. He changed cell phones, music and built one of the most well known brands in the world. And Kanye West thinks he’s destined to fill the hole that Jobs left when he died.

“I honestly feel that because Steve has passed, you know, it’s like when Biggie passed and Jay-Z was allowed to become Jay-Z,” Kanye West said. “I will be the leader of a company that ends up being worth billions of dollars, because I got the answers. I understand culture. I am the nucleus.”

Now I’m not a rap fan. That being said, the only reason I know who Kanye West is, is because of when he interrupted Taylor Swift at the MTV Video Awards. And I don’t think anyone who is a rap fan would call him the “nucleus” of anything.

He is not the most popular rapper. He is not the highest earning rapper. And I struggled to find a “top rappers” list that put him in the top ten (he only got top ten when it was just rappers of today, not all time). So why does Kanye West think he’s going to mean so much to society one day?

I will give Kanye West the fact that he’s won an impressive number of Grammys (21 so far). In the past three years, he’s won 7. But according to the Grammy website, 6 of those 7 have been for work he’s collaborated on. That makes me question whether he’s the one winning the Grammys or if it’s his collaborators winning them for him.

Kanye West is probably not the successor to Steve Jobs. He did have one quote, though, in the NYT interview that might show him following in another celeb’s footsteps.

Ladies and gentlemen, meet the next Charlie Sheen.