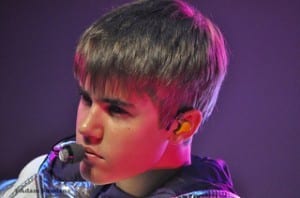 Justin Bieber nowhere to be found

Justin Bieber is going through the same growing pains as any teenager…unfortunately for him, the entire world is watching him.

Which means the entire world now knows that Swedish police found a bag of weed on Justin Bieber’s tour bus this week . Uh-oh.

Justin Bieber was in Stockholm, Sweden, for a concert on Wednesday when local police detected the smell of marijuana coming from his tour bus, according to TMZ. At the time, the bus was parked outside of the hotel Bieber was staying at; neither Beiber nor anyone else was inside the bus at the time, police said.

Eventually, though, Bieber had to get to his concert. So he got in the bus and drove to the venue (the Globe Arena); little did he know, the narcotics unit of the Stockholm Police were following him with a warrant to search the vehicle.

The bus pulled into a parking garage and by the time police could search it, Justin Bieber and everyone else had already entered the arena and left the bus behind.

According to local reports, police found a bag of marijuana on the floor of the tour bus. But since neither Justin Bieber nor his crew were in the bus, and the police couldn’t prove ownership, no one was charged with possession of the drug.

Police also found a stun gun without a permit, which is illegal in Sweden.

Accoding to police, no one will be charged and no arrests will be made.

Previous Article2013 NFL Draft–Who will go #1? It might not be who you thinkNext ArticleThe Definitive Guide To Studying In Your Backyard