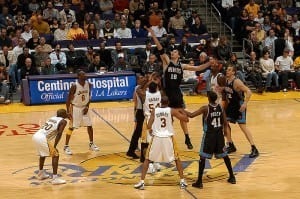 Jordan Hill was charged with a third-degree felony Monday for allegedly choking a woman with whom he was having a “dating relationship” according to the Harris County district attorney’s office in Texas.

Lakers reserve forward Jordan Hill faces up to 10 years in jail and a $10,000 fine. He is required to return to Houston for a court appearance that has yet to be scheduled.

Jordan Hill was playing for the Houston Rockets at the time of the incident. The Rockets had a game that, day but Hill did not dress for the game.

The L.A. Times obtained the relevant court documents, which detail the accusations against Jordan Hill. Hill allegedly got into a dispute with the woman, Darlene Luna, on February 29 while they were discussing their future at his apartment. The woman threw his two cell phones to the floor and was hit in the legs by Hill who then pulled her off of a sofa before throwing her against a wall. According to the complaint, Hill then put her in a chokehold, causing her to gasp for air. Luna flew back to Orlando, where she resides and called the police in Houston about four weeks later, on March 29. She emailed pictures of bruises on her legs and upper body and also copies of her plane tickets to and from Houston.

The Lakers issued a statement later Monday stating, “We are aware of the media reports alleging an incident involving Jordan Hill from two months ago when he was a member of the Houston Rockets. We do not have any details regarding these reports and therefore, as well as due to the personal and legal aspects, it would not be appropriate for us to comment. Any further inquiries regarding this should be directed to Jordan’s representative.”