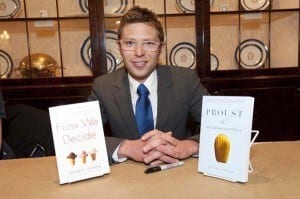 Jonah Lehrer has resigned from his position as staff writer for The New Yorker after it was revealed he fabricated quotations that he attributed to legendary musician Bob Dylan in his book Imagine: How Creativity Works. Obviously, Lehrer learned a thing or two about creativity as it appears a few of the quotes he used did “not exist.”

According to an article published in Tablet magazine, Jonah Lehrer fabricated quotes from Bob Dylan in this best-selling book. It was just last month that Jonah Lehrer gave a public apology for recycling content from The Wall Street Journal, Wired and other publications for use in blog posts for The New Yorker, an act his editor coined “a mistake.”

Following the publication of the article in Tablet, it became clear that The New Yorker and Lehrer’s publisher, Houghton Mifflin Harcourt, had had enough.

David Remnick, editor for The New Yorker, met with Jonah Lehrer on Sunday night and accepted the author’s resignation from the magazine. “This is a terrifically sad situation,” said Remnick in a statement. “but, in the end, what is most important is the integrity of what we publish and what we stand for.”

Print copies of Imagine have been scheduled to be recalled by the publisher, Houghton Mifflin Harcourt, in the wake of this latest literary scandal.

Jonah Lehrer issued a statement through his publisher in which he offered a public apology.

“The lies are over now,” Lehrer said. “I understand the gravity of my position. I want to apologize to everyone I have let down, especially my editors and readers.”

Lehrer continued, “I will do my best to correct the record and ensure that my misquotations and mistakes are fixed. I have resigned my position as staff writer at The New Yorker.”

Michael C. Moynihan, a journalist for Tablet magazine, was the first to investigate the validity of the quotes attributed to Bob Dylan. According to Moynihan, Jonah Lehrer repeatedly lied about where he attained the quoted material during Moynihan’s investigation.

“Over the next three weeks, Lehrer stonewalled, misled and, eventually, outright lied to me. Yesterday, Lehrer finally confessed that he has never met or corresponded with Jeff Rosen, Dylan’s manager; he has never seen an unexpurgated version of Dylan’s interview for No Direction Home, something he offered up to stymie my search; that a missing quote he claimed could be found in an episode of Dylan’s ‘Theme Time Radio Hour’ cannot, in fact, be found there; and that a 1995 radio interview, supposedly available in a printed collection of Dylan interviews called The Fiddler Now Unspoke, also didn’t exist. When, three weeks after our first contact, I asked Lehrer to explain his deceptions, he responded, for the first time in our communication, forthrightly: ‘I couldn’t find the original sources,’ he said. ‘I panicked. And I’m deeply sorry for lying.”

Jonah Lehrer, 31, admitted in his statement, “I told Mr. Moynihan that they (the quotes in question) were from archival interview footage provided to me by Dylan’s representatives. This was a lie spoken in a moment of panic. When Mr. Moynihan followed up, I continued to lie, and say things I should not have said”

Through his literary agent, Andrew Wylie, Jonah Lehrer declined to be interviewed.