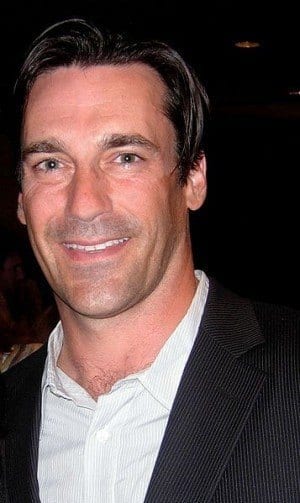 Jon Hamm is synonymous with Don Draper on the hit TV series Mad Men, and he has made several big screen appearances in supporting roles, but it looks like Jon Hamm has landed his first role as a leading man on the silver screen.

Jon Hamm was Kristen Wiig’s friend with benefits in Bridesmaids, and his attempts to take down Ben Affleck’s crime ring in The Town were heroic, but everyone knows Ben Affleck trumps all. But it’s Jon Hamm’s turn to be the one who can’t lose in Disney’s Million Dollar Arm.

The film tells the true-life story of sports agent J.B. Bernstein, who will be played by Jon Hamm, who created an India-based reality show about cricket to find baseball prospects. The show was called The Million Dollar Arm (hence the name of the film) and introduced the world to two Indian men, Rinku Singh and Dinesh Patel, who became the first two Indian men to sign contracts with Major League Baseball.

More Jon Hamm news links the sexy 41 year-old and 22 year-old Daniel Radcliffe (Harry Potter) to the same role. Well, almost. Rumors are starting to churn that both actors are interested in playing the same character at different ages in a new four-part British television miniseries.

Not much is known about the project yet, but according to Vulture, the project would have Jon Hamm and Daniel Radcliffe taking on a darkly humorous role as a young Russian doctor who tries to overcome—or at least hide—his insecurities and self-doubt. The setting is post-World War I, and with stars like Jon Hamm and Daniel Radcliffe interested, this miniseries is sure to get some more media attention in the coming months.

So Jon Hamm has two upcoming projects too look forward to, and he is still killing it on the set of Mad Men. Is there anything this man can’t do? He’s even dishing out advice these days. Rookie magazine’s web series, Ask a Grown Man, recently starred Jon Hamm as the adviser of young ladies. The series allows young girls to ask questions to older men—father figures, not in a creepy way—that they would maybe be uncomfortable asking their own fathers.

Among the questions, sent via text, a girl asks what she should do about a guy who is interested in her one day, then ignores her the next. Jon Hamm gives an endearing, fatherly answer. “The world is your oyster. You’ll be just fine. Don’t define yourself with who wants to get with you. I’m sure you’re a lovely person.”

Jon Hamm already sounds like a dad, he’s played a dad in roles, now if only he and long-term girlfriend Jennifer Westfeldt would have children, Suri Cruz would be pacified and the world would be a much more adorable place altogether.