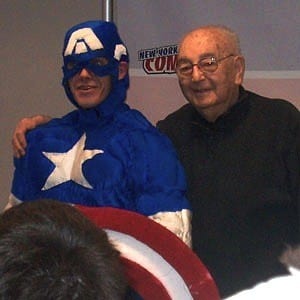 Joe Simon, the co-creator of Captain America, has died at the age of 98.

Comics Beat reports that Simon’s death was announced by his son on Facebook. Simon co-created hundreds of legendary comic book characters, including Captain America, the Sandman and the Fly.

As Comics Beat eulogizes, Simon, with his partner Jack Kirby, revolutionized the superhero, horror and romance genres, and are responsible for comic books as we know them today.

Simon told Graphic NYC in 2009, “What happened is that it depended on the times. There were a lot of times when artists were unemployed in this business, and we had to make our own jobs by creating something off the beaten track, a new type of hero or something entirely different like Young Romance. We were the guys that were up to the task. We were good friends and we enjoyed working together. Jack was married about two years before he got out, and I had just gotten married after I had got out, so we decided we’d make it easy on commuting so we bought houses across the street from one another.”