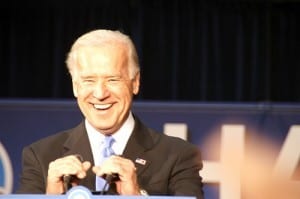 Joe Biden is joking about running for president in 2016. At least, many hope he’s joking. Joe Biden recently grabbed a cellphone from a man in a Sarasota restaurant yesterday and began to engage in a conversation with the person he had been talking to—the man’s brother—about health care reform.

After awhile, Biden told the supposed Republican that he was not going to argue with him to get his vote. It was then that Biden said, “After it’s all over, when your insurance rates go down, then you’ll vote for me in 2016.”

Biden’s campaign declined to comment on his potential presidential plans for 2016.

Of course by saying this, Biden made himself the punch line of many jokes. People took to Twitter to voice their opinions on Biden’s comments. Mitt Romney Central said, “Scariest part of Halloween so far is that Joe Biden said he might run for president in 2016. #Chills.” Lavar Walker tweeted, “Joe Biden is thinking about running for president in 2016. He might be the first 200 year old president.”

Shortly after this exchange, Biden slammed a GOP ad on the auto industry as “flagrantly dishonest.”