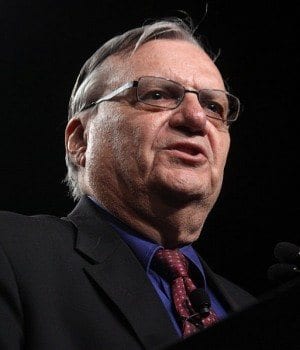 Maricopa County Sheriff Joe Arpaio may be in hot water, but Rick Perry is defending him.

CBS News reports that Arpaio is the subject of a report by the Justice Department which accuses him of commmitting civil rights violations. The department’s Civil Rights Division alleges that Arpaio has committed a wide range of violations, including following a pattern of racial profiling and discrimination, and carrying out heavy-handed immigration patrols based on racially charged citizen complaint.

Perry defended Arpaio but also used the opportunity to push his presidential campaign, saying, “I would suggest to you that these people are out after Sheriff Joe. He is tough. And again, when I’m the president of the United States, you’re not going to see me going after states like Arizona or Alabama, suing sovereign states for making decisions.”

Read more about the allegations against Joe Arpaio here.