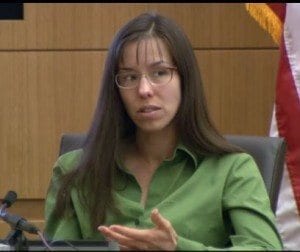 Jodi Arias faces the death penalty if she is found guilty

Jodi Arias is the center of activity around the bombshell murder trial in Phoenix, Arizona that is exploding news and minds as details of the murder events are retold by the defendant.  Jodi Arias shot and stabbed on-again off-again Mormon boyfriend Travis Alexander’s death and could face the death penalty if she is indeed convicted of first-degree murder.

Jodi Arias has stood on trial for over a week now, repeating her personal recollection of the event over and over.  Apparently, Jodi Arias was taking nude pictures with Alexander, who lost his tenuous grasp on his temper when she dropped his Olympus camera on the floor.  The two tussled, and Jodi Arias ran to retrieve his gun from the study, in order to stave him off with a simple threat.  Unfortunately, the enraged Alexander went on to tackle her, and she shot blindly, killing him.

As for the stabbings and grand finale throat slitting?  Jodi Arias testified that she simply can’t remember.  On stand she swore, “I have no memory of stabbing him.  There’s a huge gap. I don’t know if I blacked out or what, but there’s a huge gap. The most clear memory I have after that point is driving in the desert.”

Jodi Arias’ defense lies in her testifying that the killing was in self-defense, while the prosecution alleges that Jodi Arias killed Alexander in a jealous rage, after finding out that he was taking a trip with another girl.  Her earlier words, “No jury would ever convict” her of murdering Alexander, stem from the fact that Jodi Arias planned to commit suicide after the crime was done.  Jodi Arias has later went on to say that “those are probably the most bitter words I’ll ever eat.”