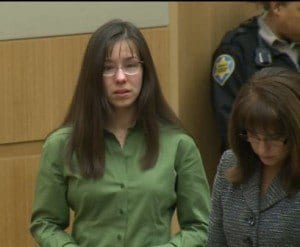 After being convicted of murder, Arias still faces sentencing this afternoon

Jodi Arias could face the death penalty after being found guilty of first-degree murder on Wednesday. After four long months, Arias may finally get what she’s looking for.

Arias, 32, was convicted of murdering 30-year-old Travis Alexander in his Phoenix home in 2008. Alexander was shot in the face, stabbed 27 times and slashed across the throat. His body was found in his shower.

The trial became a national sensation as gruesome details of the case were released. The media focused on the juxtaposition of the violence that was committed and the innocent-look of the accused Arias. The one-time waitress was often described as attractive and soft-spoken, both adjectives that seem to contradict the idea of a cold-blooded murderer.

Friends of Alexander spoke of their relief on hearing the final verdict.

“It just feels so good … to finally have the truth and be vindicated,” said Dave Hall.

Another friend, Clancy Talbot, spoke of its effect on Arias.

“Looking at Jodi’s face,” she said. “I think this is probably the first time in her life she has ever been held responsible for what she’s done, ever, and I think she’s in shock.”

Arias’ lawyers never contested the fact that she killed Alexander. Their case rested on the reason for his death. But in the end, the defense’s claim of self-defense was rejected. Jennifer Willmott, Arias’ defense attorney, Alexander was controlling, and psychologically abusive of Arias.

“Jodi Arias killed Travis Alexander,” Willmott said. “There is no question about it. The million-dollar question is what would have forced her to do it?”

The sentencing phase of the trial begins this afternoon. Jurors will look specifically at how Alexander died. If they see it as overly aggravated, premeditated, or extremely cruel, it is likely that Arias will receive the death penalty.

And that is just what Arias wants.

“I said years ago I’d rather get death than life,” Arias said. “And that still is true today. I believe death is the ultimate freedom, so I’d rather just have my freedom as soon as I can get it.”

127 inmates currently reside on Arizona’s death row. If sentenced to death, Arias would be the fourth woman on death row in the state.