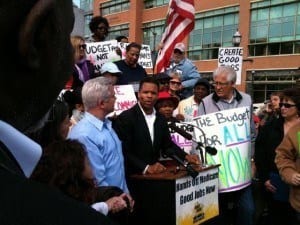 According to the Mayo Clinic, the congressman is responding well to treatment

Jesse Jackson Jr., the Democratic congressman from Illinois who has been on a medical leave of absence from Congress since June, is being treated for bipolar II disorder, according to the Mayo Clinic in Rochester, Minn.

Jesse Jackson Jr. has been on an official leave of absence from Congress since June 10, when, according to family members, he collapsed at his Washington home after being “completely debilitated by depression.”

The congressman’s office initially reported that he suffered from exhaustion, but as the summer passed more information was released, including a statement made by the Mayo Clinic on July 27 admitting Jesse Jackson Jr. was being treated for depression and gastrointestinal issues.

On Monday, the Mayo Clinic released new details regarding the congressman’s condition. Despite performing an “extensive evaluation,” the clinic failed to give a timeline for more updates on Jackson’s condition.  The congressman’s wife, Sandi Jackson, told the Chicago Sun-Times earlier this month that she hopes her husband will return to Chicago by Sept. 1.

According to a statement released by the Mayo Clinic Monday, “Congressman Jackson is responding well to the treatment and regaining his strength.”

The statement also noted that bipolar disorder affects approximately 5.7 million people in the U.S. and “affects parts of the brain controlling emotion, thought and drive.” According to the clinic, bipolar II disorder is caused by a complicated series of genetic and environmental factors.

Bipolar II disorder is a less severe type of the disorder than the type I form, involving milder forms of mood elevation and milder episodes of hypomania that alternate with bouts of severe depression.

The statement continued to state that Jesse Jackson Jr. underwent gastric bypass surgery eight years ago and that such an operation “can change how the body absorbs food, liquids, vitamins, nutrients and medications.”

Jesse Jackson Jr. is the target of an investigation by the House Ethics Committee into possible wrongdoing involving President Barack Obama’s vacated Senate seat – now held by Sen. Mark Kirk. Just days before Jesse Jackson Jr. left Congress on medical leave, one of his former fundraisers, Raghuveer Nayak, was taken into custody by the FBI on charges of paying hundreds of thousands of dollars in bribes to doctors.

Jackson’s spokesman, Rick Bryant, has said the congressman could resume work within weeks, adding Jackson seemed “like his old self.”

Last year, Jackson’s wife, Sandi, revealed that the congressman had engaged in an extramarital affair. Last Thursday, Sandi Jackson spoke with reporters but failed to give a timetable for the congressman’s return to Congress.

“At this point we are taking every day one day at a time,” Sandi Jackson said. “But we here on the ground are preparing for his eventual return. We don’t know when that’s going to be, but we want his constituents to know that they are very much on his mind.”