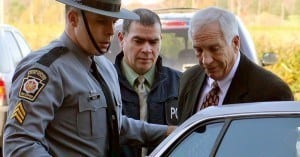 The former Penn State assistant football coach uses the weeks before his sentencing to put together his own accord of the trial.

Jerry Sandusky, former Penn State assistant coach, is reportedly writing a book as he awaits sentencing. Sandusky was convicted of 45 counts of child sex abuse last June and is currently being held at the Centre County Correctional Facility in Bellefonte, PA. The book is Sandusky’s second; his first, titled “Touched: The Jerry Sandusky Story,” was published in 2001 and focuses on his time as Penn State assistant coach and charity work.

Helping Sandusky is his wife Dottie, who recently had her written correspondence privileges taken away by prison officials for the large amount of paperwork exchanged between the two. While the content is unclear as of yet, the Washington Post speculates that the new book will be his own account of the trial thus far. Unable to have testified at his trial because of adopted son Matt Sandusky’s allegations of abuse, Sandusky “views his sentencing as an opportunity to tell his side of this,” as was said by his lawyer Joe Amendola. The prison has provided pens and paper (and time) for the former assistant coach to formulate his thoughts.

Though it is safe to assume a general antipathy of the book, experts nevertheless say there is little chance Jerry Sandusky will make money off of the book as convicted felons are restricted from earning profits from books written about their crimes.

Sandusky’s sentencing is set to take place in September.