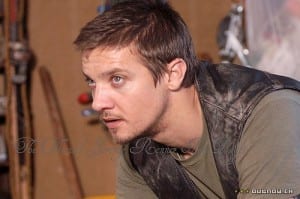 Jeremy Renner avoided being involved in a barroom brawl in Manila, but other members of his party were not so lucky.

E! reports that Renner was traveling in a party of six that was making a late-night pub crawl. A member of the party Renner was in dropped a glass on the floor which led to an argument between the pub staff and members of Renner’s party.

“He was at the bar when the fight broke out and he exited,” Renner’s rep confirmed to E! News, adding that he was “not injured” and “not involved” in the attack.

Although Renner exited, members of his party remained behind and became involved in a brawl with the pub staff. The weapons later confiscated by the police detail how serious the brawl was — clubs, cutting instruments and a homemade ax made from a motorcycle brake rotor were all used to injure members of the party. A member of Renner’s party, Vorasit Issara (the general manager of the Sri Panwa Resort), was critically injured and is currently hospitalized, after being stabbed in the stomach and taking the homemade ax to the neck. He is suffering from serious stomach wounds, partially severed neck tendons and bruises all over his body.

Renner is in Manila filming the latest “Bourne” installment, “The Bourne Legacy.”