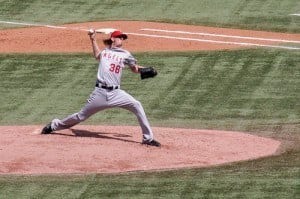 Jered Weaver has become the tenth Angels pitcher to accomplish the feat. It is the first of his career.

Jered Weaver has pitched the 10th no-hitter in Anaheim Angels history Wednesday and in the process has outshone Albert Pujols, the franchise’s latest addition, but not his sensational contract.

Jered Weaver shut-down the Minnesota Twins, retiring 20 of the first 21 Twins batters faced as the Angels swept the series in three games with a 9-0 victory.

It is the second no-hitter thrown by Angels pitchers in the past year, and the first for Jered Weaver in his career.

Jered Weaver has established himself as one of Major League Baseball’s premier pitchers and this latest accomplishment serves to punctuate an already notable career.

Jered Weaver has begun the season with a 4-0 record, the Angels are 10-5 if that speaks to his strength as a starter, and with this no-hitter has lowered his ERA from a respectable 2.02 to an even-greater 1.61. He struck out nine in the game with the Twins, walking only one and throwing only 121 pitches. Jered Weaver now leads the MLB with 45 strikeouts in just six starts.

The team signed former St. Louis Cardinals all-star, Albert Pujols, to an astounding 10-year, $240 million deal this recent off-season and is still waiting for the deal to pay the dividends they had expected. Jered Weaver, in contrast, received a contract extension from the Angels for five-years and $85 million, and that money appears to be paying off.

Battling through a homerless April, Angels first-baseman Albert Pujols told FOX News, “I know I can hit home runs. Whenever they come, they’re going to come. I’m trying to have good, quality at-bats. It’s a long season. At the end, my numbers are going to be there and nobody’s going to talk about what happened in April.”

Pujol’s can do little but continue to play hard and, indeed, hope his numbers are there when the season comes to a close. Pujol’s statement fails to consider the historic pitching performance of Jered Weaver, who will certainly be thinking about this performance far beyond the end of the season.

“I love this team and this area, everything about it. I’m just glad I got to do this in front of them. That’s how I would have wanted it if I could choose.” stated Jered Weaver to a joyous home-town crowd.