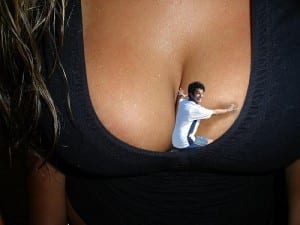 Jenelle Evans, anesthesia, prescription drugs and a razor-sharp scalpel or two; add them all together, and you’re left with nude photos. That may seem like a strange math problem, but according to the Teen Mom 2 star, that is exactly the recipe for the photos that have made their way to the web.

Jenelle Evans, 20, underwent breast augmentation surgery last week; however it’s not the size of her breasts that have garnered so much attention but instead photos taken by her former boyfriend, Kiefer Delp, of her in the nude post-surgery that had been sold to tabloids and leaked onto the internet.

The MTV personality hit the web herself in order to clear up some lingering questions regarding the release of the photographs. She took to Twitter to answer why Delp took both the before-surgery pictures and post-surgery ones as well.

“I was f—– up off of anesthesia after the surgery. I didn’t kno [sic] he took the after photos. The before photos [he] took without me lookin and told me he deleted them thats why I was laughing in the pic cuz [sic] I’m like lol stop.”

Evans continued by stating, “I’m very depressed but I’ll eventually get over it. I just wish I knew who to trust these days. He was the only one that had them and now they are online. I also have texts of him admitting it.”

This statement seemingly contradicts the Twitter post, in which she claims she was unaware the nude photos had been taken, but in the ethereal realm of reality TV who’s to know where contradiction starts and publicity begins.

Jenelle Evans may grudgingly resent the actions of her ex; however, as she illustrates, the opportunity for blackmail remains strongly in Delp’s court: “I didn’t give him any permission and yes I kno [sic] I have a good case but he has more blackmail on me so I can’t.”

With a comment like that, one cannot help but question what type of fun this reality star has gotten herself into. Let’s just hope the next batch of blackmail doesn’t include a semi-conscious woman, enlarged breasts or not.