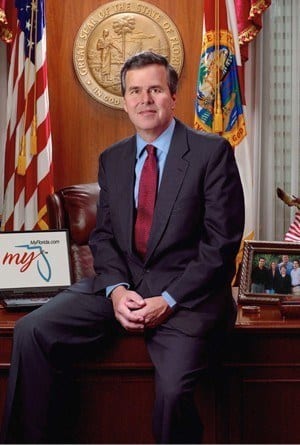 After much wading the former Florida gov. backs the GOP front-runner

Finally Mitt Romney got the endorsement he has been patiently awaiting. Former governor of Florida Jeb Bush announced Wednesday that he was endorsing Mitt Romney’s bid for the Republican presidential nomination.

Coming a day after Mitt Romney swept the Illinois Primary, where he dominated Rick Santorum in the popular vote and delegates, Jeb Bush decided to be the most recent supporter of the former Massachusetts governor. “Now is the time for Republicans to unite behind Gov. Romney and take our message of fiscal conservatism and job creation to all voters this fall,” Jeb Bush said in a written statement. He also congratulated the other Republican candidates “for a hard-fought, thoughtful debate and primary season.”

Jeb Bush has taken a backseat for most of the primary and was even urged to run for president by many party members, seeing how torn Republicans were between the candidates early on. With his recent endorsement it would appear that Mitt Romney is line to receive the Republican nomination for president and the support of the big GOP donors. Out of the 1,144 delegates needed to win the candidacy, Romney has 563, Santorum has 263, Newt Gingrich has 135 and Ron Paul has 50, the Associated Press reports.

Jeb Bush personally contacted Romney late Wednesday telling him he was going to go ahead and endorse him for presidential candidacy. The endorsement did come as some what of a surprise for the Romney party but was, nonetheless, a sign of good things to come.

“He has long demonstrated an outstanding ability to bring people together,” Romney said in a statement. He added, “This is a key moment in the presidential contest and Jeb’s counsel and support will be critical in the coming months in my effort to defeat Barack Obama and turn around our country.”

[easy-social-share buttons="facebook,twitter,google,linkedin,stumbleupon,pinterest" counters=0 hide_names="force" fixedwidth="yes" fixedwidth_px="111"]
Previous ArticleBilly Joel isn't The Stranger on American Idol stageNext ArticleSherry Arnold: missing since January, her body might have been found in another state