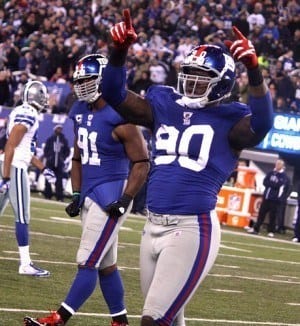 Jason Pierre-Paul is now under the scrutiny of the public and his coach, Tom Coughlin, after a video of himself hazing another player was posted August 19.

Hazing has been frowned upon no matter where it occurs, and Jason Pierre-Paul should know football is no exception. Now, the New York Giants is on the press’s watch due to defensive end Pierre-Paul’s use of hazing rituals for those considered rookies.

The viral video was posted by Giants punter Steve Weatherford on his twitter account, and featured Jason Pierre-Paul lifting cornerback Prince Amukamara off the ground, carrying him into a room, then dumping him head-first into an ice bath. Ice baths are typically used in the treatment of athlete’s sore muscles and injuries, according to SportsIllustrated.com.

Although Amukamara did not kick or scream as Jason Pierre-Paul brought him to the freezing cold tub, he emerged from the water clearly upset as his teammates laugh and cheer at the act of hazing.

The frown on Amukamara’s face is most likely a result of the constant hazing his teammates have put him through since he was signed onto the Giants, during which his clothes have been cut up and his body thrown in the ice bath a total of eight times last year.

According to SportsIllustrated.com, Couch Tom Coughlin has expressed his displeasure with the video, calling parts “inappropriate.” He also expressed that during preseason he was working on making the team a family. However, Amukamara has said that his teammates won’t consider him “one of them” until he plays in three more regular-season games.

The source of the video, punter Weatherford has also given an apology to those unhappy with the team’s viral video on his twitter page. “”I want to apologize to the fans… The video I posted was distasteful,” Weatherford tweeted. “Our team is a family, and we love each other. I am sorry to the fans,” he tweeted.

Jason Pierre-Paul has not met the press with a comment, and the only things heard from him are the obscenities and insensitive bashing featured in the video towards his teammate. Although the video was removed by Twitter the day it was posted, for violating harassment policies according to the NY Daily News report, it is still available on other video-hosting sites.